Apologies for the delay in the next instalment, it’s been a busy week since getting home, with getting stuck in to a new job and preparing for our forthcoming wedding.

As mentioned in the last post, today is Andy’s birthday and also gala night! Our butler had asked us what time we would like to be woken in the morning, we’d said 9am but we were awake before this – I think the time changes had been playing with our body clocks! We got up, had a bath and headed to the Top Sail Lounge for a refreshing glass of fresh orange juice while Andy opened his birthday cards and gift from me.

We were then approached by Dany, the head butler to advise of a problem in the room and asked us to return to the cabin with him.

All I can say is WOW!!! There was a full line-up of the butlers waiting for Andy, singing happy birthday with a huge continental breakfast, bottle of fizz and a card from the Captain. This was one of those moments that makes memories. We went back downstairs with the fizz and the cake to finish opening cards etc.

We were quite happy to take the remainder of the bottle back upstairs with us to have with some of the breakfast items that had been put out when one of the butlers said he would take it. I made a comment that there wasn’t much left to which he offered to bring another bottle should we so wish! This is just another example of the service being second to none.

The continental breakfast was an amazing spread with smoked salmon, cold cuts, fruit, pastries, cereals, the list goes on and on! 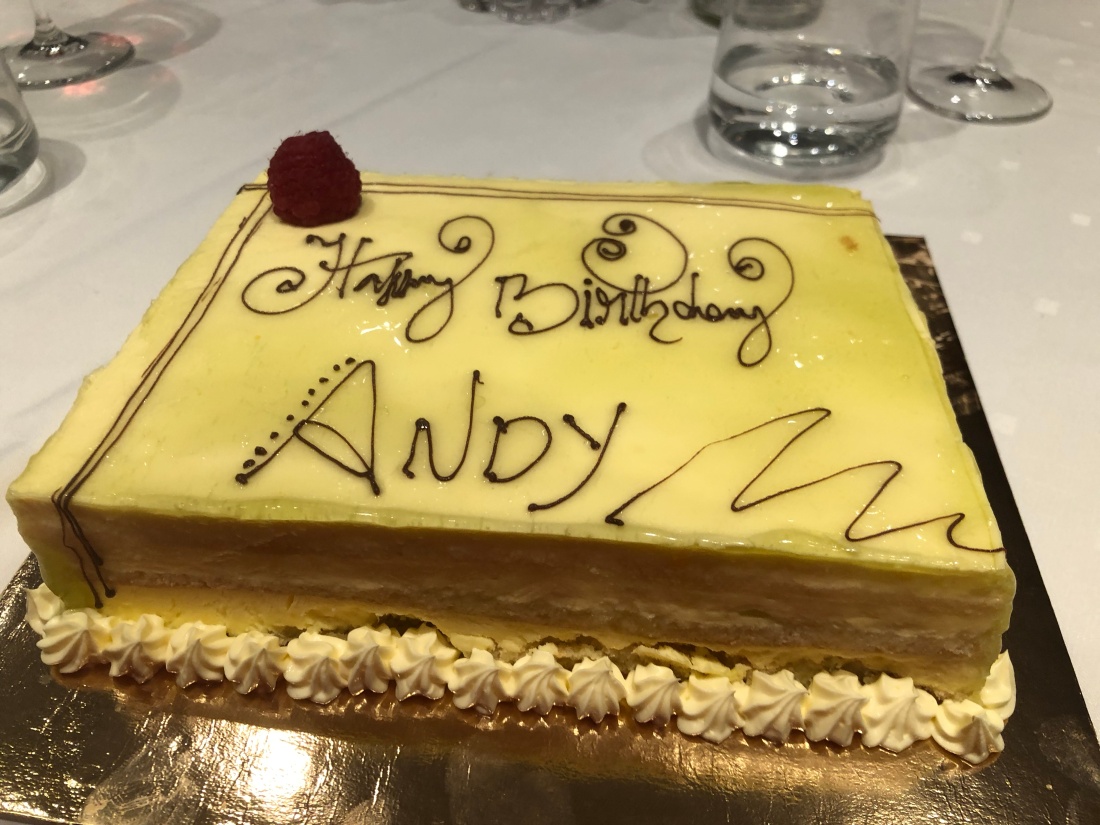 It was another day at sea, which was also set to be the first Elegant / Gala night. With this in mind, some well-deserved time on deck was required for rest and relaxation, together with out usual walks around the ship.

The weather was somewhat stormy, which meant that the pools around the ship were closed – at one point a wave in the indoor pool on deck 14 hit the magrodrome roof! It simply wouldn’t have been safe to swim, however since returning home I have read complaints of the pools being shut – this is the obvious reason why!

At one point, whilst sat on deck, we were ushered back inside because we were heading towards some rain – again another example of the fabulous service in the MSC Yacht Club!

The evening’s menu was once again incredibly impressive, with lobster and rib steak featuring. The food was once again sublime with excellent service. We were a table of four as our friends Lesley and Tony joined us for Andy’s birthday celebration. 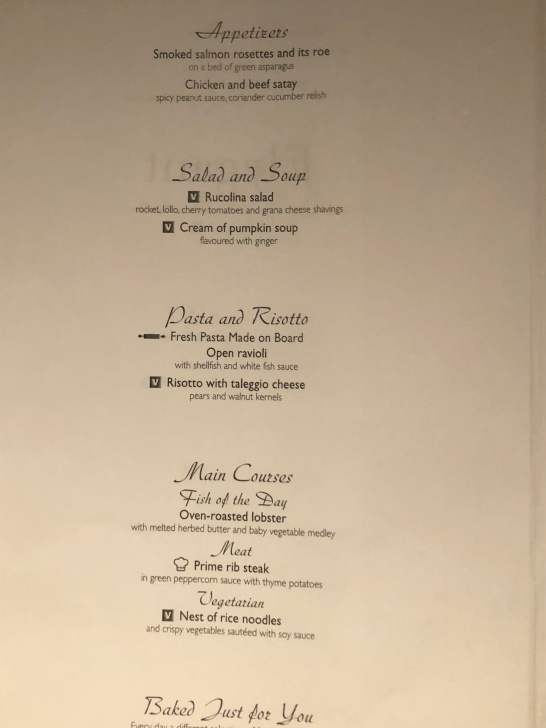 Now I’ll mention about one of the issues we had (which was totally beyond MSC’s control) and that is surrounding dress code and the attitude of other guests. During our meal I needed to take a comfort break and on my way back in to the restaurant a Welsh woman said to her husband “Another one that’s not made an effort” which was clearly in relation to my outfit.

Owing to the passenger mix on MSC it is impossible to tell who speaks English and therefore may understand what you’re saying if you’re rude enough to talk about other people. I was wearing lounge suit trousers and a nice shirt with cufflinks. I was not wearing a tie and had left my jacket at the table as it was very warm. This comment was quite upsetting. As mentioned previously the dress code on MSC is laid back and just suggested with those who wear tuxedoes being somewhat in the minority.

To be brutally honest this woman and her husband’s dress sense left a lot to be desired but I wouldn’t have been so rude to say anything about it at the time, to them or anyone else. If it hadn’t have been for the fact I didn’t want the hassle and wanted to return to the table I would have challenged them on what was said. Instead I just avoided them for the rest of the cruise – their loss in my eyes.

The rest of the evening was spent in several of the bars around the ship trying any number of the myriad of cocktails available… for some reason I can’t seem to remember exactly which ones… hic!

From here on I’ll be changing the format of the blog slightly and just writing about the particular highlights rather than a day by day encounter – there are only so many times I can write how amazing something was before it gets repetitive – but trust me – it was amazing!

4 thoughts on “Ain’t no party like a Yacht Club party!!”