This is an old review I wrote for Cruise Critic, but hopefully will give a flavour of the ship. We stayed in a Fantastic balcony cabin for this cruise… 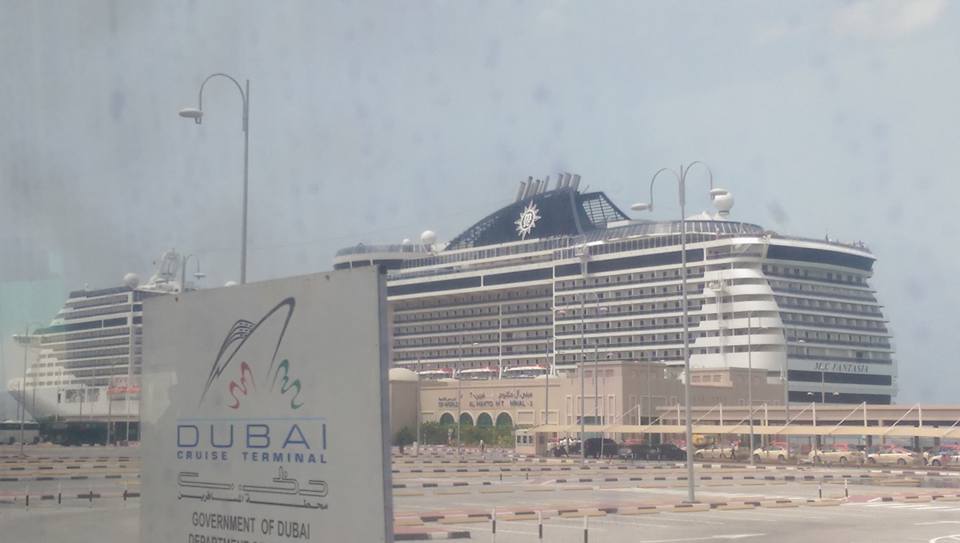 As my partner and I have always wanted to see Petra and enjoy cruising with MSC, we thought this would be an ideal opportunity to take an extended holiday that would cover both, and also spend my partner’s birthday onboard.

Our flight from Manchester airport with Etihad departed on 24th March and was an overnight flight to Abu Dhabi. Whilst there were no issues with the flight, it wasn’t the most comfortable we have had, so would probably avoid flying Etihad in the future. As we came in to land, the pilot informed us there may be a delay or we may not be able to land due to a terrible storm. This had me a little worried – nevertheless we landed and followed the immigration rules etc and collected our cases before finding our private transfer to the port.

On arriving at the port, there was no sign of Fantasia, only of Norwegian Star. We asked the driver if there was potentially another terminal as we’d not been to Abu Dhabi before – he didn’t understand what we were asking. He flagged someone from the port staff who told us that Fantasia was cancelled. Our hearts sank and then panic set in. What were we to do? We were in a foreign country and due to the storm Fantasia was still in Dubai!

Waiting in the cruise terminal, thinking about contacting our agent but then realising it would be the very early hours we decided to try and find someone else with more information. We were informed that a bus would be sent for us from Dubai. What a relief! It soon arrived and we were on our way – it was obvious what bad weather there had been as a lot of the roads were flooded. The journey to Dubai was quite interesting and on the way to the cruise port we got to see all of the famous buildings, effectively a free tour; always look on the bright side of these things.

I do think MSC could have potentially handled this better, there were quite a few passengers expecting to join at Abu Dhabi and as it was a fairly short coach journey, a car could have got a receptionist or similar to the cruise terminal to assist with these queries.

Embarkation was extremely quick and we were soon in our balcony cabin and got showered and changed in to some of the clothes we’d packed in our hand luggage. To our surprise and utter delight there were chocolate strawberries waiting, courtesy of MSC and as a surprise for my partner some canapés and a bottle of fizz. The main cases were delivered shortly after. Following that we were off to explore the ship and have a ritual glass of champagne to get the holiday started. 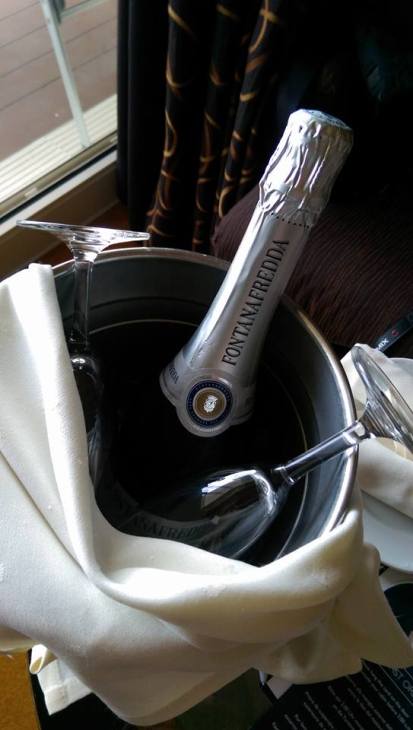 Throughout the day we met with a number of crew we have met on previous cruises and they all seemed very pleased to see us again, remembering our names and the ships we had been on.

On to dinner time, we had requested a table for two and had been put on a larger table; we didn’t have a problem with this but as it was such a long holiday we would have preferred to be alone. On our way out of the restaurant the Maitre D asked if our table was ok and if we would prefer a different one. We said the table was fine but if there was a table for two available we would really appreciate it. Not a problem and we were soon changed to table 961 in Cerchio D’Oro – overlooking the wake – one of the best tables in the house. I think the Maitre D had remembered us from a cruise we took on the Armonia last year.

The following day, our call to Sir Bani Yas was cancelled due to high winds which would make tendering dangerous. I was disappointed at this as I was looking forward to a snorkelling experience. In hindsight it is probably a good job we didn’t go as it was quite cool weather with some rain showers!

We took a taxi and went to see the Grand Mosque in Abu Dhabi – I’m glad we did. What a beautiful place! It’s huge and reminded me of the Taj Mahal in style.

We went to our new table for dinner and were greeted by our new waiter, Erazo and his assistant Reksi and the wine waiter Erik. All offered wonderful service throughout the cruise, remembering our preferences for wine, recommending particular dishes and having time for a bit of a chat every night.

The food on this cruise was different to usual, with a daily menu which was never repeated, rather than the usual rotating menu. We had several themed nights, such as French night, Arabian nights, Greek night, Italian night and Spanish night. Every night we ate 5 or 6 courses, yet as the portions are relatively small we didn’t put on too much weight or feel uncomfortable. Some of the highlights food wise in my opinion would be the Opera Gateau, duck a l’orange, Greek salad, spumante risotto.

At all of the ports of call we sorted ourselves out, we’re not big on ships excursions and prefer to do our own thing. At Aqqaba we had arranged a private tour to Petra through a company we have used in Egypt for similar tours off Nile cruises. Petra was quite simply amazing. It’s a tough day out which would be impossible for people with reduced mobility. Ensure you take plenty of water with you, and even some snacks might be advisable.

We entered the Suez Canal late at night which meant we spent a good portion of the next day transiting the canal – it really is a marvel of modern engineering.

We experienced some delays on the cruise due to medical emergencies, three in total, this delayed our arrival in some ports and shortened the time we had there, but this is not MSC’s fault; as passengers we were kept informed and you can’t ask for more than that.

The entertainment onboard was varied, we felt there would be something for everything. There were a multitude of quizzes including a progressive trivia as well as normal ‘fun’ quizzes, dance lessons, arts and crafts, lectures – one particular lady giving lectures was Hilda who we had met on the cruises we took to and from Hamburg last year.

At night time there were the usual production shows the highlights being Wonderland based on Alice and a Michael Jackson show as well as opera, dance and acrobatics. In the various bars around the ship there were different bands and musicians playing – something to suit everyone. We tended to stay more in the Manhattan or Transatlantico bars on deck 7. The Inoteca wine bar was also a favourite hang out of ours for a quiet glass of wine after dinner to allow the food to settle.

The night we stopped in Civitavecchia there was a changeover of some of the crew, with a few bands changing from MSC Splendida which was also in port. We were sat in the Inoteca wine bar enjoying a glass of wine when I had a tap on the shoulder – “I think I know you” – it was Irena, part of a duo “Smile” from Splendida who remembered us – we were so happy to see her it really made our day. We went to the Transatlantico later and she was playing in there and then sang one of our favourite songs!

We’ve got some wonderful photographs from the cruise – we booked a 100 photo package for £64 – was quite surprised how many photos of us there were by the end of the trip we had to sit in the wine bar and put them in to piles of yes, no, maybe!

This cruise really was more than just a holiday, the ship was more than a hotel – it felt like our home for 16 nights, we then changed cabins to back to back a short cruise to Barcelona and Marseille, another 3 nights!

On the night of 11th April I planned to go and get some champagne from the bar at midnight (just by the glass as included in package, to toast my partner’s birthday) when suddenly, Irena started singing happy birthday one of the bar supervisors, Ruth, and some of the wonderfull bar staff we’d met – Eriska, Katerina, Nannette came in with a birthday cake and a bottle of champagne for him! What a wow moment!! 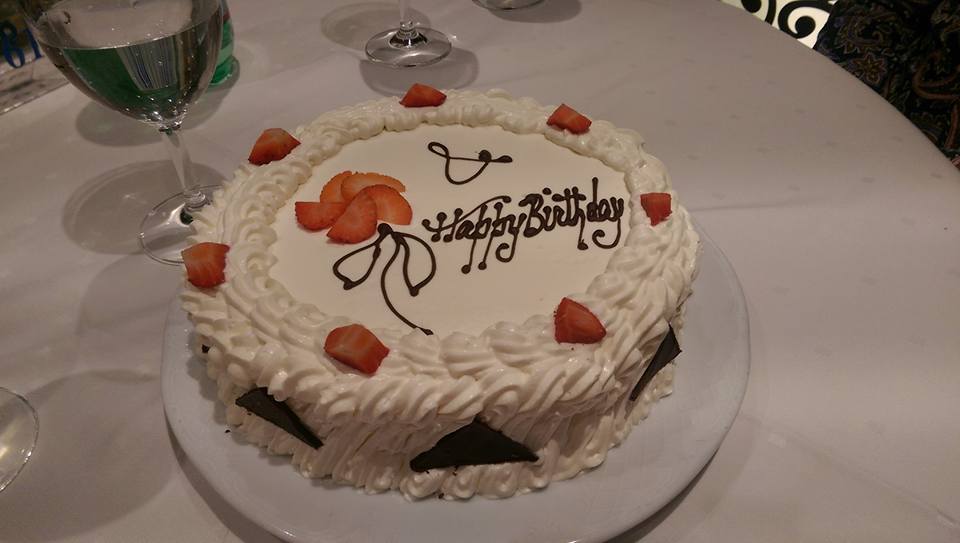