As a post-Christmas break and a gift for our friends we booked a night at the Olde Barn Hotel, Grantham for a murder mystery special.

A professional team of actors from Stirling Murder take over one of the function suites to act out the murder mystery whilst the hotel provide dinner, bed and breakfast included in the price.

The Olde Barn is a fairly large hotel set in rural Lincolnshire, about ten minutes drive from the historic market town of Grantham which is most famous for being the home of Sir Isaac Newton and the birthplace of Margaret Roberts who later became Britain’s first female Prime Minister, Baroness Thatcher of Kesteven, aka Maggie!

We arrived at the hotel too early to check in so went in to town for a sandwich and a quick drink before returning just after the 2pm check in time. We were assigned rooms 707 and 709 – as there were no standard rooms available we’d paid an extra £15 per room to upgrade to a superior room.

The rooms were spacious and very clean. Whilst recently decorated, the pine furniture which must have been expensive originally does look dated, however cleanliness is key in my book, so top marks there.

The plot for the murder mystery was The Love 40 Club, with the plot based around a private members club where love might be found. The approximately two and a half hours were well played out by a variety of diverse actors, however it was difficult to hear them at times as the sound system used in the room was terrible. This was a common complaint around our table of eight, and was particularly bad for me as I struggle to hear voices when there is background noise. Apart from that, we enjoyed the aspect of the stay provided by Stirling Murder.

You’ll know from my other reviews, food is quite an important factor to us. As you’d expect when catering for large groups it was a set menu of limited choices, with two starters, two main courses and two desserts to choose from.

We both opted for the chicken Cesar salad to start with: 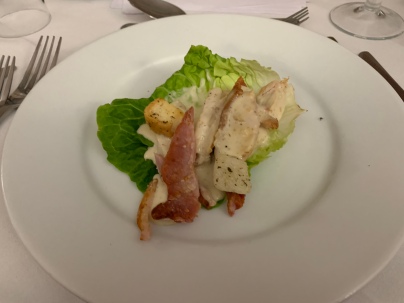 It was pretty tasteless, and not really a classic Cesar salad. It was a fair portion but left us underwhelmed.

Our main courses arrived, Andy had opted for the braised beef. You’d usually expect braised beef to have been cooked for hours and fall apart at the touch of a knife. Unfortunately it was very chewy and his portion was smaller than the others around the table.

I opted for the poached chicken breast in tarragon sauce. This was perhaps the worst main course I’ve had in a long time. If the chicken had been dropped on the floor it would bounce and hit the ceiling it was that rubbery! The accompanying vegetables we had to share between us were over cooked, cold and mushy. 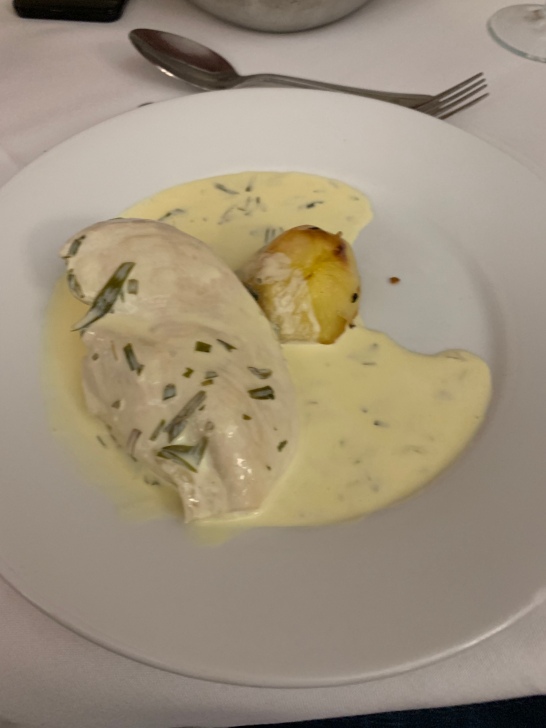 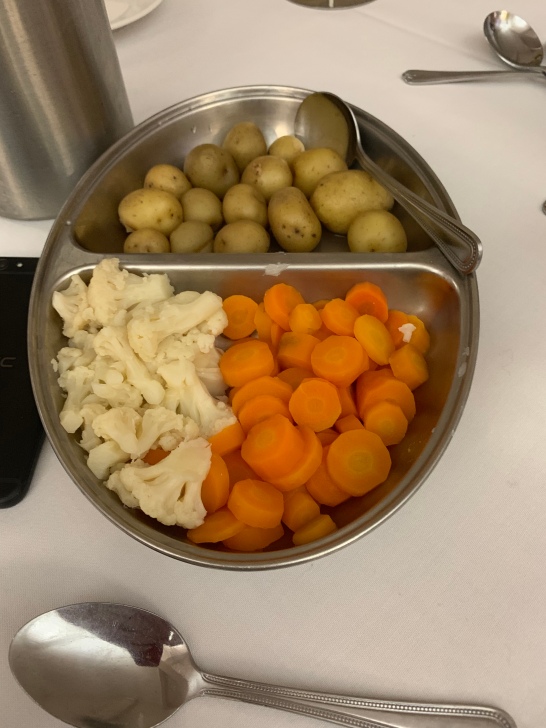 This was a start contrast to the previous year, and we wonder what had gone wrong this year. I managed to ask a waitress if I could change the chicken as I couldn’t even cut it and she obligingly brought me the beef instead, but again it was incredibly tough.

The dessert of a bought-in lemon cheesecake was, however, very tasty.

Unfortunately we didn’t manage to catch the murderer, and this was probably due to the aforementioned issue of not being able to hear half of the speeches.

After a final drink in the comfortable library area of the hotel, we retired to our bedrooms and then noticed how paper thin the walls are. Fortunately it wasn’t an enforced late night as most guests in the hotel had evidently been at the murder mystery, and as such we managed to sleep quite well.

The following morning we had a quick breakfast before heading home. The breakfast selection is the usual buffet style with cooked items and cereals. The sausages on the hot buffet were fantastic. As the hotel had been so full overnight we were seated in the bar over the corridor from the breakfast room.

We had a good time at The Olde Barn but we both feel this is most likely only because we were able to share the occasion with friends. Had we been on our own as a couple we probably wouldn’t have enjoyed the experience and would have probably been quite annoyed with the stay.

With that in mind, we won’t be returning. We do wonder whether the evident drop in standards is linked to the hotel no longer being branded as a Ramada Resort, or whether this is coincidental.