I’m sure we’ve all seen a certain film about a ship and can recall the script “I can still smell the fresh paint, the sheets had never been slept in, the china had never been used… they called it ship of dreams…” I won’t make any more comparison!

We’ve previously sailed on maiden cruises and it is an experience like no other, but to be invited to the Christening ceremony of the latest addition to the MSC Cruises fleet was an absolute privilege and a dream come true! 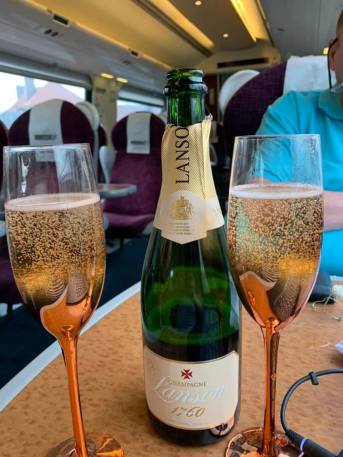 The evening in Southampton was as uneventful as ever  save for a quick sneak peek at the ship from Mayflower Park. Our hotel, the Mercure, left a lot to be desired.

We were awake bright and early on Saturday morning and headed to the City Cruise Terminal for 11am and were straight onboard the ship.

We were allocated a Fantastica balcony cabin, number 10386 at the aft of the ship. It was lovely and spacious with ample room for a week’s cruise. The shower room is bigger than it looks on my photograph implies. 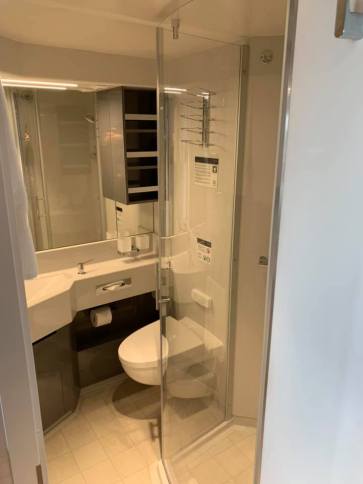 After dropping our bags we met up with our friends Mark and Jill who we have had the absolute pleasure of cruising with previously. Naturally as part of exploring the ship we needed to try every bar we could find!

MSC Bellissima is nearly identical in design to her sister ship MSC Meraviglia which we cruised on in November 2017 and you can read our review of her here.

Over our cruises with MSC we have met so many wonderful crew who go out of their way to ensure the best possible guest experience. With that in mind we have become good friends with a number of crew and almost feel part of the family! We were so happy to meet Victoria, Francisco, Ana-Maria, Anastasia, Dany, Pun, Gusti and Wiwik to name just a few.

We enjoyed a delicious lunch in the restaurant before heading off again round the ship for more exploring and bar sampling! 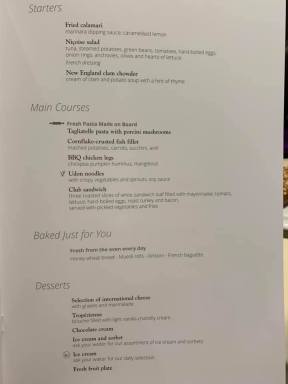 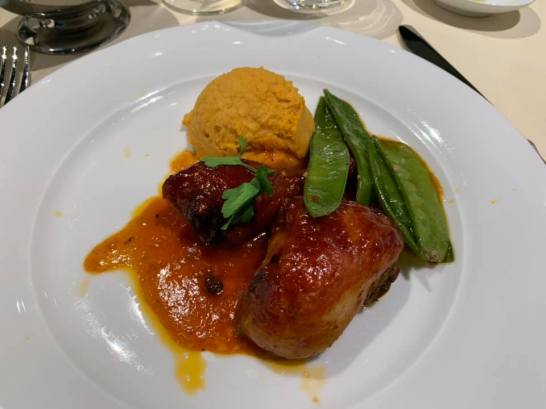 MSC Bellissima’s Yacht Club layout is slightly different to Meraviglia as the Top Sail Lounge and Restaurant feature a mezzanine deck more similar to MSC Seaside. The Meraviglia class of cruise ship is designed to be the ship for all seasons and this shows in the design of Yacht Club sun deck with lots of cover in case of bad weather… More on bad weather later…

Our tour of the ship continued and we made it to the gym… of course we didn’t use any equipment (we wouldn’t want to spill the champagne). We also had a brief look at the MSC Aurea spa which offers guests a variety of treatments from massages to Botox. We managed to resist having any cosmetic work done on the basis that we shall just pickle ourselves to avoid aging!

MSC opened the speciality restaurants with some tasters available – the beef in the teppan yaki and the sushi was out of this world! Unfortunately we were otherwise engaged at the champagne bar and missed the taster in Hola! the tapas bar and L’Atelier bistro…

Our exploring carried on with visits to the Aurea sun deck and the champagne bar. The champagne bar serves a selection of fresh seafood (at an extra cost) including oysters, langoustines and clams. 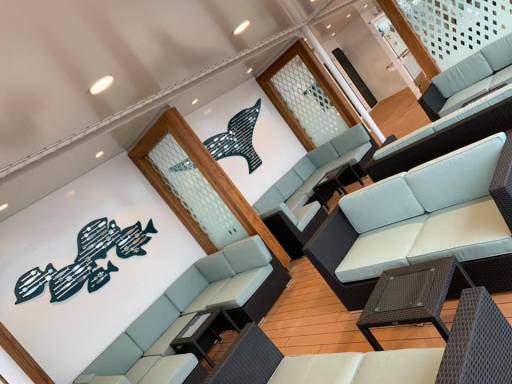 The central point of most ships is the atrium – usually where you’ll find reception guest service and a few bars over a couple of decks. True to MSC Cruises style Bellissima features stunning Swarovski crystal stair cases. 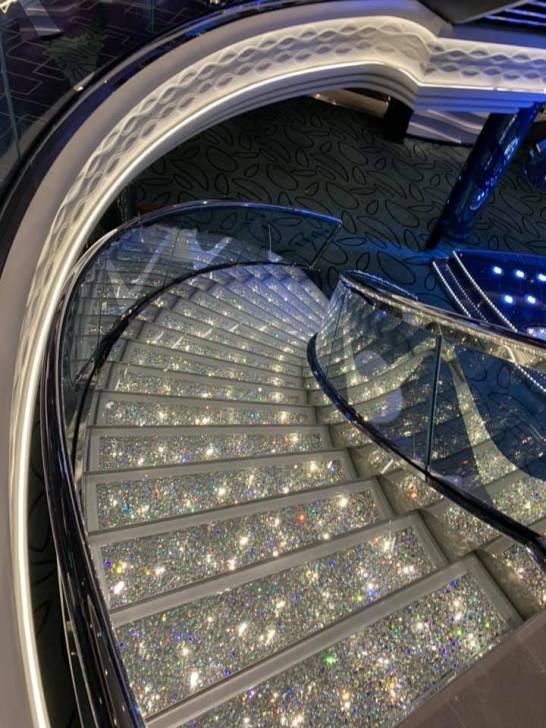 Particular to the Meraviglia class of cruise ship is the central promenade, the Galleria Bellissima which showcases the amazing LED screen dome.

So let’s fast forward to the main event and the ceremony.

A star studded event hosted by Holly Willoughby. Unfortunately, the English weather got the better of us – with winds gusting up to 78mph we had to leave the marquee – as ever safety is paramount. We were lucky that we were able to see the performance of Cirque du Soleil and of course the amazing Andrea and Matteo Bocelli, as well as listen to speeches from Antonio Paradiso MD of MSC UK and Pierfrancesco Vago CEO of MSC Cruises.

Unfortunately, this meant that Sophia Loren’s ribbon cutting didn’t happen as planned and we diverted back to the Galleria Bellissima for a short speech from Sophia.

Personally I am so honored to have got so close to Sophia Loren – she is a true icon of beauty and style. 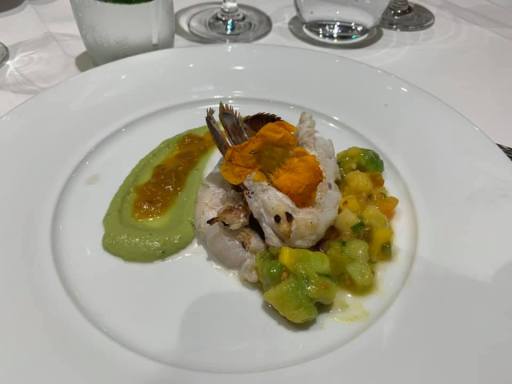 So what did we do for the rest of the evening? I’m sure you’ll not be surprised to find out much of the evening involved a “few” glasses of champagne and celebrity spotting, including Raymond Blanc, Andrew Whyment, Carol McGiffin, Lisa Maxwell and not forgetting John Cooper from Vision Cruise! 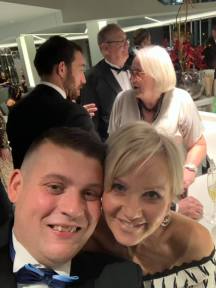 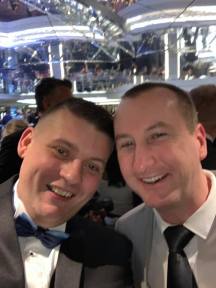 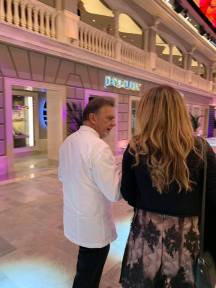 We eventually made it back to our cabin at around 3am and were absolutely stunned at the gifts that MSC Cruises gave us – MSC Monopoly, a bracelet, beer, model of the ship and a book.

Prior to disembarking this morning we enjoyed a beautiful breakfast in the dining room, I had eggs Benedict and Andy had an omelette which was cooked to perfection. The breakfast menu on MSC Cruises is extensive with pretty much everything you could think of. 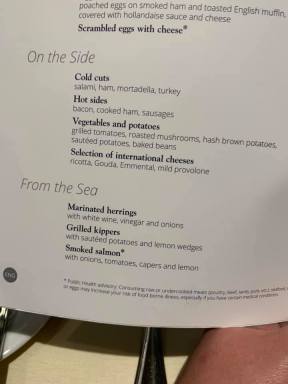 We had such an absolutely wonderful time and wish that we had enough annual leave from work to be cruising on the ship’s maiden voyage. It’s impossible to narrow down the highlights to favorite moments, however it’s been an event full of friendship and love. This picture of us with our friend Victoria just says everything. 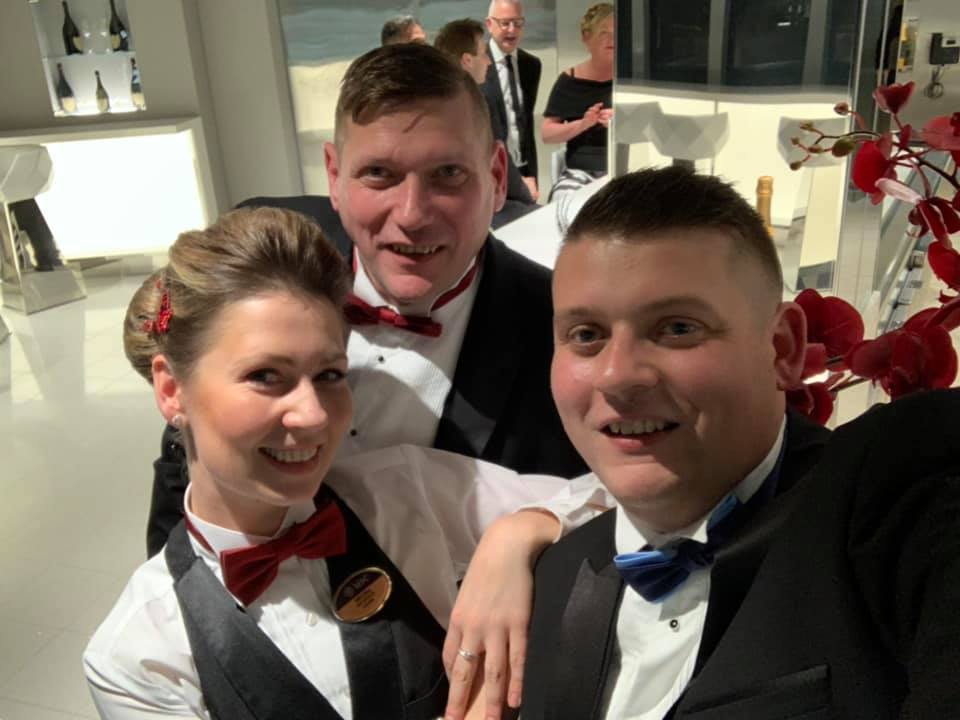 3 thoughts on “When a dream becomes reality…”